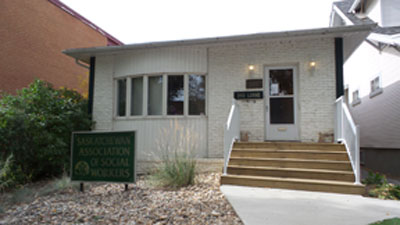 In 1997, SASW purchased a home which was renovated into an office space suitable for the association. On April 1, 1998, this home which is located at 2110 Lorne Street, Regina, was dedicated and named in the memory of Edna Osborne. The plaque that was unveiled in Edna’s honor at that time is now displayed in the board room of the SASW office. As well, on the exterior front entrance a plaque has been erected naming the house “Osborne House”. These plaques serve as a reminder of what can be accomplished by one dedicated individual.

On May 22, 2003, SASW was presented with Edna Osborne’s 2 nd Annual Distinguished Service Award. This award had been presented to Edna in November of 1980. The award was presented back to SASW by John and Nancy Stotts from Oshawa, Ontario. Mr. Stotts is the nephew to Edna Osborne.

In the summer of 2006, extensive renovations occurred to the Osborne House. The renovations included an interior wheelchair lift and a wheelchair accessible washroom. In the process of this development, a major structural problem at the rear of the building was resolved by removing an old porch and replacing it with new construction. This new construction provided the Osborne House with more office space and also houses the interior wheelchair lift. SASW now has a wheelchair accessible building for members and guest colleagues who need to be here for business and meeting purposes and can properly accommodate the Registrar in its office building. Great side benefits to this renovation project include a renovated kitchen, a new high efficiency furnace and parking the rear yard for six vehicles.

Edna Osborne first worked as a Public Health Nurse and later, worked as a medical social worker in Montreal. She attended McGill School of Social Work from 1942 until her graduation in 1945. In 1945 and 1946, Edna worked with war refugees in Germany and then in the United Nations Relief and Rehabilitation Agency. Next, she moved to the Saskatchewan Department of Welfare, Child Welfare Branch in Regina. In 1952-56 Edna shifted gears again and worked as Field Work Supervisor with the Manitoba School of Social Work. She was always concerned that social work education should be of the highest quality and that it should continue to be refined, improved, and nurtured.

During 1956-1973, ever searching for challenges and a place to make a contribution to social work, Edna assumed the role of Director of the Social Services Department, University Hospital in Saskatoon. She tended to be more clinical than generalist in her practice, but was able to engage a wide variety of skills and knowledge that recognized that the personal is political, as was demonstrated in her tireless commitment to advocacy . Edna`s advocacy included briefs to government, a life of work with Amnesty International and many other political involvements.

In addition to many complex and distinct duties, Edna remained involved throughout her life on many community boards and committees, including the Saskatoon Provisional Board of Health and with the Hysterectomy Committee of Saskatchewan College of Physicians and Surgeons.

Edna Osborne was known to balance competence and compassion with a strong yet modest personality. She had a great sense of humor, a profound love for children, and a deep appreciation of culture. She could be described as one of Saskatchewan`s true Renaissance women. She passed away on January 6, 1984 at the age of 79.